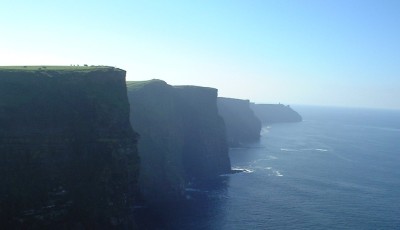 Six years after I wrote the first word, I finally leapt off the cliff today.

It could also be said that I was pushed. In any case the process of searching for an agent for my murder mystery, Deadly Empathy, has officially begun. Today I sent queries to five agents, which means I have embarked on a (potentially) excruciatingly long journey to learn whether I can interest someone who isn’t a friend or relative in my book.

My friend Meg Diaz – who, by the way, is shopping her young adult fantasy Lizard Girl – was the culprit, as she recently sat me down and told me that it was past time.

I explained I had one more big, thorough, complicated edit I needed to finish first.

She’s not the first one to have delivered forceful nudges, but her timing was perfect. As I emerged from the smoking wreckage that was the last two years, the resilience required to professionally handle rejection after rejection (a trait I developed as a freelance writer, so I knew when it had gone AWOL) had finally returned. I could weather the certainty that while some will enjoy Deadly Empathy, some people will not, and that was not only all right, it was to be expected, and that I would keep going.

I got to work – writing, rewriting, honing, polishing, cutting, adding. I liked the story more than ever.

And then the time came – as in, this morning – to actually send out my stuff. My query letter was ready, my synopsis was ready, my manuscript was ready if anyone asked for it (though I will undoubtedly always find something to improve). Let’s do this!

Or… not. As I narrowed down the list of my first five agents to contact (with more ready when rejections arrive), I had one of those wild out-of-body experiences where I sat to one side and watched my brain panic. Maybe the manuscript wasn’t ready. Maybe it wasn’t that good. Maybe nobody would want to read it. Maybe the query letter was TOO good and the book itself would be a disappointment. Maybe I should have written the book in first person, and I ought to rewrite the whole thing.

Emailing an agent truly did feel like jumping off a cliff, including that visceral moment of terror when you peer over the edge and think, “Why the hell am I doing this? I’m going to die!”

I contacted Meg, who pointed out that while querying agents is not the hardest thing about writing, it is the scariest. I decided that petrified me did not have the right to usurp my confidence and derail calm, positive me. Though I nearly vomited from anxiety, I forced myself to sent out my queries anyway. It got a little easier after the first three.

I know I’m not supposed to publicly talk about this part of the process. It seems that most writers choose to talk about searching for an agent only after they’ve snagged one. Well, this post is for friends who have been asking what is going on with my book, and for everyone who has a book but doesn’t have an agent. I’ve jumped, and you can jump, too, and yes it is scarier than shit. Maybe I won’t find anyone interested in Deadly Empathy, or the book after that, or even the book after that. But I can certainly try. Not trying would be worse.

The best part of all of this is that by finally beginning the agent process, I can return – guilt free – to joyfully writing the sequel.