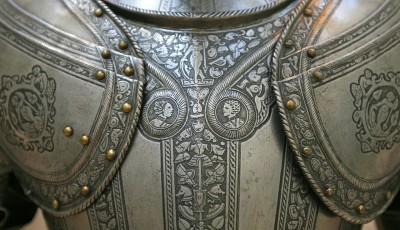 The Fallacy of Grief Armor

I have heard that losing a parent is like joining a terrible club – once you’ve endured this loss, you are marked, and those who have experienced a similar grief will instantly recognize what you share. I imagine that losing both parents puts you in a different version of this club – luckily I’m not in that one just yet. This first one has been bad enough.

There is a question that people who haven’t joined this club ask that exposes their innocence. They ask whether the death was expected, or whether it was a surprise. Often there is an underlying tone to this question; what they are really asking is, “Were you ready?” It addresses a common belief that if one is prepared to face a parent’s passing, it will be easier to endure, and they are hoping I will confirm this.

The answer is – it doesn’t matter whether it was expected or not. On the surface, one can feel ready, with wills in place, final wishes known, goodbyes said, love expressed. Sure, that can be accomplished in some circumstances. You may see the slow decline, and know that death is approaching, and you had best gird yourself for a rough time.

But for me, my father’s death last November opened doors into grief that I didn’t even know were there. I had no way to prepare for the sobs that shook my body, the sensation that I was falling into an abyss, the intensity of pain that humbled me to my core. I have lost dear friends and beloved family members – I am not a stranger to grief – but this version has punched me in the gut, over and over again.

I couldn’t protect myself from the worst of this pain. It was coming, and my preparedness suit of armor might as well have been tissue paper for all the good it did. There was a lot of busywork crap I had to do at first, and it was good to be organized for the funeral home details and following through with Dad’s will. But the loss that has haunted me since has eclipsed those initial weeks of slogging through a bunch of tasks I didn’t have the heart or energy to tackle (but did anyway). The real, lasting grief has proven to be much more difficult to handle, and I cannot organize my way out of it. It hits when it damn well feels like it, and all I can do is crumple and wait for the storm to pass.

I have an inkling now of how overwhelming the loss of a child would be. I can see how one would simply never want to get out of bed, ever. I appreciate how that type of pain ends marriages and drastically changes the surviving parents, who are shadows of who they used to be, as parts of their hearts have been mercilessly cut from their bodies.

I step back from that chasm and focus on what’s around me, reminding myself that it is the natural order of things that my life would continue after my father’s ended. I spared him agony by not dying first. Yet when I dream about wanting to ask my father a question but I can’t because I suddenly remember he is dead, I wake, and my cheeks are wet with tears.