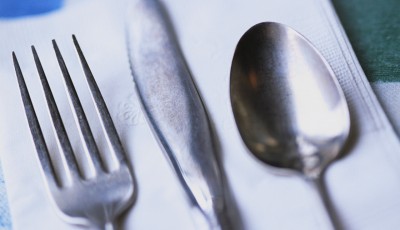 Jean and I trudged along the dark, wet sidewalk, wondering if we’d missed the restaurant, or if it had closed down. We squinted at corner street signs and building numbers. “This place had better be good,” I said as it started to rain. Jean quickened her pace, and I hurried to keep up with my friend’s long-legged stride.

We were in Vancouver, British Columbia, on business, and she’d heard of an authentic Hungarian restaurant near the waterfront. I imagined pasty goulash, gray mystery meat and sauces choked with paprika, but I didn’t want to disappoint her by seeming too conservative.

This was not my first culinary adventure with Jean. We had traveled through China together, devouring roasted duck and spicy tofu. We had also popped dozens of antacid tablets. Pork dumplings in Xian produced one particularly memorable night hunched over the toilet. But now we were in Canada, the epitome of safety and civility. I told myself — with the slightest swagger — I can take anything this city dishes out.

Nestled between offramps and dead-end streets, with a cluttered view of shipyard booms, a tiny whitewashed house emerged from the damp mist. Compared to nearby high-rises, the cottage looked like a mushroom among redwoods. A hand-painted “open” sign beckoned. I followed Jean through an arched wooden gate and bounded up the steps. A few yellowed, framed restaurant reviews hung on the cramped vestibule’s walls, but we didn’t stop to read them.

A man in his mid-50s sat at a desk near the entrance, slouched over a battered hardcover book. He wore dark pants, a white shirt and a vividly embroidered blue and red vest, which I imagined was Hungarian. He looked up when we said hello.

“Do you want to eat?” he asked, his pale blue eyes measuring us from under his wispy eyebrows and wire-framed glasses. He didn’t ask “How many?” or “Smoking or non?” His only question was whether we wanted food.

When we said yes, he stood up, straightened his shoulders and led us to a table for two near the front window. His slight pot belly was supported by a small white apron tied around his hips. He gave us menus and vanished into the kitchen.

Jean and I noticed that we were the only patrons, though it was just past 7:30 on a Friday night. The dining room was long and narrow. Brightly colored crockery and linens adorned the clean white walls. A large, slightly disturbing oil painting depicted rural women with vacant bovine eyes. I shuddered and concentrated on the canned folk music emanating from the ceiling.

The menu looked intriguing, with Hungarian names and English descriptions in an ancient typeface. There was plenty of meat, as I expected, which suited me but wouldn’t have pleased my vegetarian husband. As a faint aroma of hot oil wafted from the distant, silent kitchen, I settled in to select a meaty indulgence.

Our maitre d’ reappeared — apparently he would be our waiter, too. Jean told him we were new to Hungarian food. What would be a good introduction?

He sighed heavily. “What a problem. What a terrible problem,” he repeated over and over.

He asked what we knew about Hungarian food. I confessed my ignorance, though Jean piped up and asked if they used a lot of chili. She meant chili powder similar to paprika, but a vision of Texas chili must have sprung into his mind, and he recoiled as if she had burned him.

“No! Chili is very bad! A Hungarian restaurant serving chili would not be Hungarian! How could you ask that? Never, never eat chili!” Even after she explained herself, our host still huffed and paced with displeasure.

He launched into a story about a culinary competition. The finalists were Hungary, England and the United States. The Hungarians made a wonderful dish. But they lost! The English placed second with fish and chips, and the Americans won with a hot dog. He banged his palm on a nearby table, rattling the silverware. “Can you believe it? A lousy hot dog could beat the finest Hungarian dish?” Unsure whether to believe him, we cooed our sympathies.

He leaned against another table, crossed his arms and declared an introduction couldn’t be done. We would have to jump in.

Bravely, Jean asked for the sour cherry soup. Perhaps still stinging from her chili question, he gruffly asked her if she knew the soup was chilled and very sweet. She said that it would be all right and his eyes narrowed. Then she ordered the trout.

“That’s the least Hungarian thing on the menu,” he muttered. She started to change her mind and he interrupted her. “It’s the best trout you will ever eat. In Hungary, it’s the only fish we make.” How could she argue with him? She asked for langos (fried bread) for us and he grunted approval.

I pointed to the lamb chops, asking if they were good. He practically flew into the rafters again. “Of course they’re good! Everything here is good!”

“But are they a good way to try something Hungarian?” I quickly amended.

Edging closer, a little placated, he assured me they were quite Hungarian. He shot another disapproving look at Jean. I said I wasn’t sure which soup I wanted, and he quickly solved that for me. “You want today’s soup,” he announced.

“What is today’s soup?” I asked, handing him my menu.

“It’s the best soup you will ever eat.” He turned and strode back to the kitchen.

Jean and I looked at each other, eyebrows raised. The deserted restaurant, the dark windows, all alone with a touchy Hungarian — anything could happen. A band of gypsies could magically emerge from the bathroom, twirling like ghosts. Horsemen shouting commands in Magyar could charge from the kitchen, their dark steeds wheeling in a spangle of color. The doors and windows could sprout bolts and noisily lock us in the restaurant forever.

Our host returned, walking through the echoing dining room, and asked us where we were from. “Seattle,” I said, and Jean mentioned Los Angeles. He wasn’t sure where Los Angeles was. However, he knew Seattle, and described an American customs official searching his car at the Canada-United States border.

“I kept asking that obnoxious man, ‘What are you looking for? Maybe I can help you find it. I know this car quite well.’” He set a hand on his hip and confided, “I’m not afraid of authority. Police and officials don’t bother me. Still, that man searched and searched.

“Finally I told him, ‘I have little money, but I will not spend it in your country with this sort of treatment.’ So I left and went back to Canada, and I haven’t gone to America since.” He strutted back to the kitchen.

Jean leaned toward me. “I’m so sorry I suggested this place!” she whispered.

“No, it’s all right,” I whispered back. “We wanted to try something different, and this certainly fits the bill. You can apologize if the food stinks, how about that?”

Our host reappeared with two large, oblong pieces of fried bread, and our moods lightened. He placed a small glass dish filled with minced garlic between Jean and me, and advised us to ladle on plenty of garlic and salt.

Escaping steam scorched my fingers as I tore off a puffy piece. The combination of garlic, salt and hot bread eased my anxiety. The soup arrived during my second mouthful, and I incoherently mumbled my appreciation. Jean simply nodded, her mouth also full.

Having finished the fast-cooling langos, I turned my attention to the nameless soup. A shallow bowl held small flour dumplings, French-cut string beans and carrots in a clear, pungent broth, with herbs and spices floating on top. A thin band of paprika rimmed the bowl’s edge, like ocean foam after a receding wave. With the first few spoonfuls, I understood how food critics could describe a dish as “assertive.” Decoying me with an initial impression of dill, the soup’s paprika aftertaste snuck up quietly and then leapt onto center stage, loud and boisterous. Entertained, I happily finished my bowl.

Jean’s soup was more like a dessert. Tart cherries hid in the creamy pink sauce. After she found all the cherries, she sighed. “This is way too sweet,” she said.

I peered across the table into her half-empty bowl. “You don’t have to finish it.”

“What? And admit he was right? I’m not giving him the satisfaction.” She gripped her spoon tighter.

Our entrees arrived, and the fragrant, soothing aromas began to convince me that our host was merely an interesting character, not someone afflicted with a personality disorder. Yet I felt compelled to finish every bite or risk his wrath. My first bite boded well for cleaning my plate — the tender lamb fell apart in my mouth before I could chew it.

The best way to describe Hungarian food is to compare it to music. My lamb chops proudly trumpeted their complex blend of flavors with strength and determination, like a high school band’s Sousa march. They were tasty and they knew it. Jean let me sample her trout, which was more subtle. It reminded me of soft classical music played by a flute quartet, smooth and elegant.

Toward the end of my meal, though my stomach was about to burst, I was tempted to pick up my lamb bones and chew off the last flavorful shreds of meat. When our host came to collect our plates, I asked him if it’s OK in Hungary to chew on the bones.

“What is rude,” he said, “is to leave the bones. You should eat them.”

I chuckled and looked up. The skin around his eyes hardened — he meant it.

He took my plate. “We do. We eat the bones. It’s not hard, you break them open and eat them. In Hungary you eat everything.” He sniffed and turned back to the kitchen.

Jean shrugged. “You should have tried it,” she said, though her smile gave her away. We paid — the first time I ever tipped generously out of fear – and waddled toward the door.

“I’m glad you two girls came tonight,” our host announced to our backs. “Otherwise I would have closed early and killed myself.”

We brushed off his parting remark, certain he was joking. Yet as I laid awake that night, my stomach packed as tight and heavy as a medicine ball, his comment didn’t seem so unlikely.

I rose from my lumpy hotel mattress and rummaged through my bags. “Jean,” I asked, “did you bring any antacids?”

This essay first appeared in Salon, and was reprinted in Her Fork in the Road, an anthology published by Travelers’ Tales, under the byline Julie Jindal.