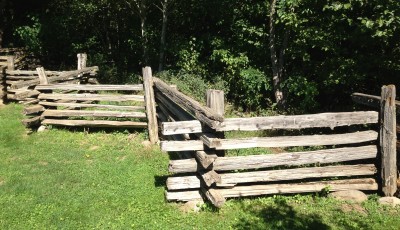 Things to Consider Before Jumping

He stood in the hot, yellow-dry meadow and regarded the fence one more time.

On the other side, there was lush grass. Deep, cool shade. And most appealing – apple trees dropping their fruit. He could smell their sweetness. He yearned for those apples.

His shoulders were just taller than the criss-cross fence, constructed from split timbers. The rails were nailed into posts at regular intervals, which ensured he couldn’t merely push the fence over. Bits of moss and lichen underscored the fence’s age, but it was still quite sturdy. He would have to go over it.

He considered the possibility. He might be able to make it, but that would mean running hard at it before the leap. Normally he didn’t do a lot of leaping. The scorching afternoon made him feel heavy. He was tired. Maybe he should just find a shady spot closer to the creek and take a nap.

Besides, he wouldn’t want to catch a hoof in the rails and go tumbling. He could break a leg, or at least shatter his reputation with the others. The horse sauntered back to his fellows, who snorted their opinion of whether he would have made it. The apples would have to wait for another day.