Writings both real and imagined 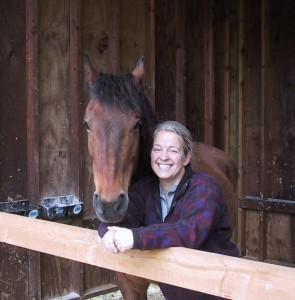 Writing and horses are my two biggest passions. This is River, my opinionated Mustang gelding, and probably my only friend who hasn’t told me that I should start a blog.

It’s strange to be back.

I had a Web site many years ago, in the previous century, before “blog” was a word. Part of my site was a brochure advertising my freelance writing services, part of it was a portfolio of my work, and part of it consisted of random essays that I posted for fun.

The site grew dusty and unwieldy. Updating it became a chore, and at that time I had plenty of freelance work so I didn’t feel as if I needed it anymore.

I resisted the blogging frenzy for years, as I believed that it was part of the slow decline of my freelance career — the concept that the hard work of writing should be given away for free. Plus I didn’t see the point of adding my voice to the millions clamoring for an audience.

Also, over time, I transitioned from wholly nonfiction to a melange of genres. Flash fiction, essay, murder mystery, fantasy, goofy limericks… I broke out of my self-imposed confines and started writing whatever the hell I felt like writing. I used to say, “Oh, I’m not a fiction writer.” Well, screw that.

And now it’s time to share. At this point (and I reserve the right to change my mind), I’m planning to offer snippets of my writing life as I try to get three completely different projects off the ground. I’m also going to toss in some of my flash fiction (which are like chocolate, an instant hit of deliciousness) and essays (which are like a satisfying handful of cashews). Nothing too overwhelming, I promise.