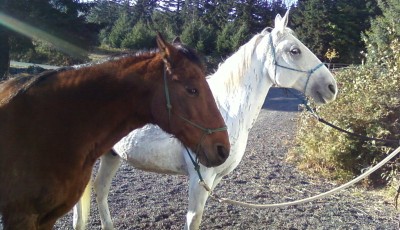 Sometimes, when it comes to teaching me a lesson, only a starkly obvious example will do. Especially when it’s a truth that I would prefer to sidle away from, thank you, oh how interesting, but no I am not going to change to incorporate the bit of wisdom I’ve been offered.

So the universe replies, “Fine, we will break this down for you as if you’re an idiot, and then maybe you will get it, because this is important.”

Recently I had to move my two horses, River and Laredo, to a new barn. I had previously boarded them in a friend’s pasture with her horses. River, my 22-year-old bay mustang gelding, had happily managed the small herd for over eight years, in an open pasture that had plenty of shelter but also a tremendous amount of freedom. Laredo, my nine-year-old white Lippizan gelding, enjoyed being River’s Number Two. River had to merely flick an ear and Laredo would gleefully charge the offending horse to reestablish who is eating from which hay pile and other important equine status positions. The herd ate together, played together, had minor tiffs and made up. With an outdoor arena and miles of trails leading from my friend’s driveway, it was an ideal situation for all of us.

Nothing lasts forever, however, and my friend had to sell her property which meant I had to find a new home for my boys. After some searching I found a barn in Odell (20 minutes away, the same driving distance) that offered full care, indoor and outdoor arenas, and some trail access. The boys could share one of the larger pastures during the day and would be brought into their stalls at night, since the pastures had no shelter.

Laredo took to the new arrangement instantly. He had been a barn horse before and knew the drill. His ears swiveled with eager anticipation whenever he heard a new person or a new vehicle, as he’s adept at making friends and mugging people for treats. He loved seeing new horses and watching the horses in the arena. He even liked watching the sparrows swooping around the rafters. Pasture time with River was the perfect opportunity to recklessly canter and gallop, and he could playfully harass the other horses in adjoining paddocks.

River was another story. His claustrophobic nature thoroughly disliked the new location. He had lived in a similar barn situation the first year I owned him, but that was long ago and he was suspicious of the unfamiliar environment. New people were scary. New sounds were terrifying. He spent his first three weeks in a constant state of alert, his eyes round with fear, head high, neck taut. Where was my wise, confident friend? He spent his time outside either anxiously chivvying Laredo around the pasture (which Laredo good-naturedly allowed) or staring at the strange cows two fields away, his body stiff with worry. In his stall, he wouldn’t eat until I removed two boards between his stall and Laredo’s, so he could take a bite of hay and then look in on Laredo to make sure he was still there.

One day, about two weeks into the transition, River gave me a long look of frustration mixed with sadness, as if to say, “When are we going home?” I almost cried as I explained that this was his new home, and that the old home didn’t exist anymore. He turned away, disgusted. But he did seem to settle a bit more after that.

Lying awake at night, I thought about this:  Two horses come out of the same situation and go into a new experience together. One of them decides that it’s a fantastic adventure, full of excitement, while the other is frightened of every novel thing, fails to see the advantages, and – if horses are capable of such things – longs for how it used to be.

In terms of temperament, while I admire Laredo’s easygoing, adventurous nature, I’m much more like River. I’m skeptical of change, and upset when tossed against my will into a new situation. Yet I can see that River’s misery is entirely self-manufactured. He could be happy, but he doesn’t have the positive perceptions that come effortlessly to Laredo.

I doubt River can do the necessary navel-gazing to realize this, but his experience was an obvious lesson for me. I always knew that perception can color a situation, but I didn’t realize how dominant perception can be.

It is possible to be cheerful or anguished in the exact same scenario.

It completely depends on how I choose to see it.